We’re greener than we seem

You may not see it, but region is 10 years ahead of others in sustainability 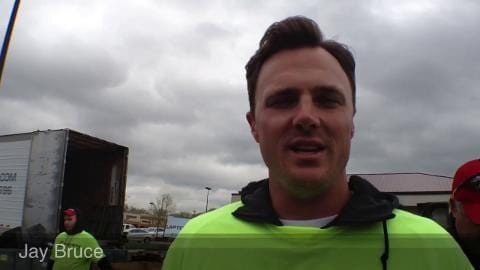 Gary Woodward of Middletown with Cohen Recycling wraps a pallet of computer CPUs in plastic at the Players for the Planet E-Waste Recycling Event at the Anderson Town Center in Anderson Township late Friday morning. Electronic items such as computers, monitors, televisions, phones and printers could be dropped off at the event. Cincinnati Reds players Jay Bruce and Ryan Hanigan were on hand for a portion of the event. / The Enquirer/Glenn Hartong

Greater Cincinnati is on the leading edge of the green movement – maybe not in showy ways like curbside composting or light rail, but in the green you don’t see.

Cincinnati is the largest city in the country to get all of its electricity from alternative energy sources, and it has the third-most homes certified under the U.S. Green Business Council’s Leadership in Engineering and Design standards. The region is also a leader in LEED-certified schools.

“This is a happening place,” said Brewster Rhoads, executive director of the Green Umbrella. “We’re turning Mark Twain’s adage on its head. In many ways we are 10 years ahead, particularly compared to other Midwest cities.”

Cincinnatians focused on sustainability see a lot to be proud of, but also opportunities for improvement 43 years after the first Earth Day, which this year is celebrated Monday.

Some of Cincinnati’s greenest successes stem from policies and financial incentives adopted by city leaders and Ohio and local school officials in the mid-2000s.

“It’s a third-party verification,” said Andrew Plogsted, sustainability manager for CPS and senior associate at GBBN Architects. “It’s one thing to say you’re green, and it’s another thing to prove it. It avoids ‘green-washing,’ which is everywhere.”

Cincinnati has 813 residential units – single-family homes, condominiums or apartments – that are LEED-certified, according to the Green Building Council, behind only Dallas, at 1,347, and Los Angeles, at 957.

LEED has four levels – certified, silver, gold and platinum – depending on how many criteria are met, and City Council tightened the incentives in 2012 to offer higher tax abatements for buildings certified at higher levels.

Meanwhile, Cincinnati Public Schools decided in 2007, in the midst of a massive rebuilding plan, to build all new schools to LEED standards. At the same time, the state began requiring districts to obtain LEED certification on buildings constructed with state money.

“There’s obviously the cost savings with the energy efficiency part, so that’s being fiscally responsible to taxpayers,” Plogsted said. “And then there are the health benefits that come from better indoor air quality and the use of (more green building) materials. It makes for an all-around better learning environment.”

The Green Building Council ranks Cincinnati No. 10 in the nation for the number of LEED-certified schools, with eight. In addition, Mount Healthy and Hamilton have three each, North College Hill two, and Amelia one, according to the agency.

Schools in Northern Kentucky have taken a different approach to going green, Plogsted said: “They are much more focused on getting their energy as low as possible.”

Turkey Foot Middle School is a zero net-energy building, meaning it produces as much energy on site as it uses over the course of a year. It is powered by the largest electric-producing solar array in Kentucky.

In a broader measure of the region’s energy conservation efforts, a recent Environmental Protection Agency report puts the three-state metro area at No. 13 nationally for the number of Energy Star-certified buildings, well outperforming its ranking as the 28th largest U.S. metro area.

And then there’s the kind of energy we’re using. The city of Cincinnati switched to its new electric aggregation program in 2012 and is now buying energy from First Energy Solutions on behalf of 60,000 residential and small commercial customers. The energy supplied by First Energy is all from renewable sources, according to Larry Falkin, director of the city’s Office of Environmental Quality.

That move, which also saved customers 21 percent vs. Duke Energy’s rates, reduced Cincinnati’s carbon footprint by about 550,000 tons per year, Falkin said – the equivalent of taking 104,000 cars off the road.

Also, Hamilton County leads the state in the number of facilities generating energy from renewable sources at 96. Cuyahoga County is a distant second with 40. Most “facilities” are solar panels, according to the Public Utilities Commission of Ohio.

Of course, even the biggest boosters of Cincinnati’s green efforts concede the area is limited by a lack of mass transportation options other than Metro and TANK bus systems – such as a subway or light rail. “We have a long way to go in terms of transportation,” Rhoads said. “It’s not an easy thing to tackle, especially in a difficult economic environment.”

The Cincinnati streetcar will run only from the riverfront to Over-the-Rhine initially, with possible extensions in the future. Light rail was last on the Hamilton County ballot in 2002, and it was overwhelmingly rejected.

Still, momentum is building in Cincinnati to push ahead where it’s possible. The city recently restarted yard waste pickup, keeping some 6,000 tons of plant material out of landfills annually. Large city-supplied recycling bins also put Cincinnati ahead of many cities, Falkin said, although not among the handful that offer curbside composting.

On April 10, City Council unanimously approved new rules that will allow rooftop rainwater to be captured and used for non-potable purposes such as flushing toilets.

Green efforts are also picking up speed in the business community, led by groups such as the Green Business Council, the local chapter of the Green Building Council and the Green Umbrella. As its name implies, the Green Umbrella includes more than 200 members, from large corporations to small farmers markets.

The Green Umbrella has grown exponentially since Rhoads took the helm about 18 months ago. The outdoor enthusiast behind Paddlefest is well-connected from his experience running Hamilton County levy campaigns and serving as an economic representative for former Ohio Gov. Ted Strickland.

One of the Green Umbrella’s current projects is working with the Cincinnati Regional Business Committee to make Greater Cincinnati more accessible for bicyclists. Cincinnati cracked the League of American Bicyclists’ list of bike-friendly communities for the first time last year at the bronze level, but advocates are aiming much higher.

“If Cincinnati reaches that goal, we think we’ll be a very attractive place for businesses to expand and young people to move back to,” Portman said. “It’s a recruiting tool.”

Rhoads sees the region’s green progress as a glass that’s half-full, if not more.

“I think we have a huge potential to be a national leader and therefore demonstrate that being an area that focuses on sustainability pays and gives us a competitive advantage,” Rhoads said. ⬛