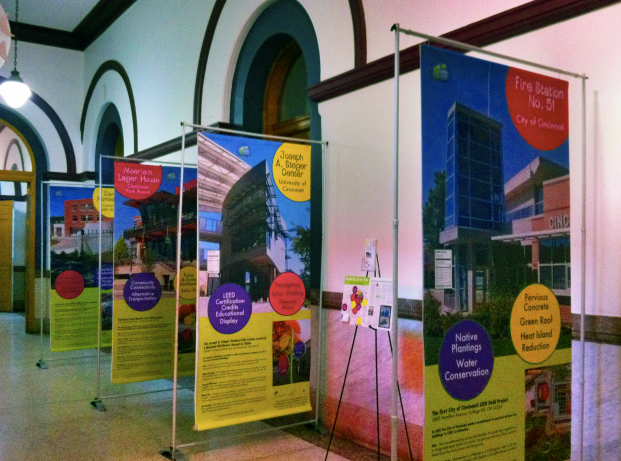 The eight poster show will be on exhibit at the Green Umbrella Summit May 3, 2013. Then it will move to another of the venues illustrated on the posters.

The Queen City and environs are gaining national attention for green and sustainable efforts. An idea from the Green Learning Station of the Civic Garden Center of Cincinnati will identify greater Cincinnati’s stock of green buildings.

Thanks to some recent green-sky thinking, area residents and visitors should be able to point to the major buildings exemplifying sustainable energy and environmental design that are part of Cincinnati’s green building movement.  The area will be “blooming” when a proposal to “plant” exterior signs in front of these sites becomes a reality. The project (Cincinnati Green Building Signage Project) is just another way the Queen City (and the city that sings) is moving forward as the Green City of the West.  Beyond attracting architectural tourists (believe me, these folks exist), the colorful, eye-catching signage project will go the distance in promoting healthy environments – good for the planet and its people.

The Civic Garden Center plays a key role as the proposed signs will adopt the same “flower” style signs found throughout the Civic Garden Center’s beautifully landscaped acres on Reading Road, and its newly opened Green Learning Station facility. The Green Learning Station (GLS), which opened last summer, is educating the public — with a particular focus on students — to incorporate sustainable strategies in their landscape, such as installing roofs planted with vegetation to reduce heat build up, and capturing and reusing rainwater through collection barrels.

Signs already in place at the GLS identify the facility’s own green roof, its solar array, rainwater harvesting system and pervious pavement, among other working installations. In keeping with the Civic Garden Center’s signage style, each sign identifying a green building has six panels that would describe the project and how its owner has contributed to the green building movement in Cincinnati. One panel, though, will direct attention back to the GLS, where anyone can access cataloged information on each structure 24/7 through QR codes.

“We think using the Green Learning Station educational sign design is a cohesive way to ‘brand’ the buildings, while directing the public to our site. When they visit our facility they can learn about green public buildings, but also what they can do to green up their own spaces,” explains Vickie Ciotti, the Civic Garden Center’s executive director. Though still in the planning stage, Ciotti notes, “We’re hoping that businesses or individuals will step forward to adopt a sign.” The Civic Garden Center, she adds, also welcomes contributions to finish the interior build out of the Green Learning Station.

Sustainable and green as well as LEED (Leadership in Energy and Environmental Design) Certified buildings can be found in nearly every Cincinnati neighborhood from single-family homes to new schools constructed by Cincinnati Public Schools. Cincinnati boasts such an impressive number of LEED structures thanks to the city’s tax abatement program (link: www.cincinnati-oh.gov/community-development/). Buildings receive LEED designation for aspects such as development density, proximity to alternative transportation, optimizing energy performance and by reducing or recycling construction waste. “For all of us who really care about Greater Cincinnati and its future, we’re excited to see the green building movement gathering such momentum. We know other cities are taking notice,” comments Roxanne Qualls, Cincinnati’s vice mayor. “These green and sustainable buildings not only demonstrate the commitment of public institutions to energy savings, they’re healthy places for our public workers which translates into higher productivity.”

Remaining panels would be used to describe Cincinnati’s Green Cincinnati environmental plan and the Green Umbrella clearing house for sustainable organizations in the region as well as to promote the Cincinnati Chapter of the U.S. Green Building Council and Green Energy Ohio’s annual tour.

The following buildings will be featured at the Park+Vine exhibit:

• Cincinnati Fire Station No. 51 on Hamilton Avenue in College Hill is city’s second LEED Certified project.  Opened in 2009, among the 12,000-sq.-ft. building’s many green aspects is its goal to reduce Green House emissions 84 percent below 2006 levels by 2050. https://green-cincinnati.com/here-is-a-green-building-fire-station-no-51-city-of-cincinnati/

• Moerlein Lager House (Cincinnati Park Board) on Joe Nuxhall Way across from Great American Ball Park. While this 15,000-sq.-ft., two-story structure is still being Certified (it opened in 2012), it is part of the 45-acre Smale Riverfront Park and is Cincinnati Park Board’s first LEED project. Because of its proximity to the Ohio River, the building incorporated a pump-and-dump geothermal system. Water is continually pumped from a well and after being used to heat or cool the building, returned to the Ohio River.

• Times-Star Building at 800 Broadway is the first LEED project for Hamilton County, which purchased the building in the late ‘80s to house county offices and Juvenile Court. The 16-story historic building, built in 1933 and now on the National Register, has been retrofitted with energy-efficient lighting as well as heating and air conditioning systems. The Cincinnati architectural firm Samuel Hannaford & Sons, designed the Art Deco style building. https://green-cincinnati.com/here-is-a-green-building-the-times-star-building/

• Joseph A. Steger Student Life Center, University of Cincinnati, Martin Luther King Drive. UC has become a national leader in sustainability with its six LEED Certified structures — the Steger center, opened in 2007, was designed to take full advantage of its unusual sliver site and is one of the most unique buildings on UC’s Main Street due to its more than 800-ft. length and 40-ft. width. There are educational panels about its LEED Certification on the west side of the top floor. https://green-cincinnati.com/here-is-a-green-building-joseph-a-steger-student-life-center-university-of-cincinnati/

• Earth Connection, Sisters of Charity, Delhi Road is a conference center that uses solar energy to store heat in the ground surrounding the building during the summer to heat the building in the winter.  The building opened in 1995 as a center for learning and reflection about “living lightly” on Earth and offers programs, tours and internships. https://green-cincinnati.com/here-is-a-green-building-earthconnection/

• Cincinnati Zoo and Botanical Garden Entry Village, Vine Street. As the country’s “Greenest Zoo,” the sign will be next to the largest solar panel array  (roughly four acres) in the U.S. accessible by the public. It also marks the entrance to the Zoo’s LEED Platinum Entry Village. The solar panels are on track to generate at least 20 percent of the Zoo’s electricity. https://green-cincinnati.com/here-is-a-green-building-cincinnati-zoo-entry-village/

• Northern Kentucky University’s Griffin Hall College of Informatics on Highway 27. Opened in 2011, the state-of-the art facility is NKU’s first LEED Registered structure and features an Intelligent Building System. The university collects electricity and water use data that the public can check out online. https://green-cincinnati.com/here-is-a-green-building-griffin-hall-college-of-informatics/