Most of the food waste problem is after it leaves the grocery store. This Greenbuild 2018 presentation reviews New York City’s program and one from a large NYC food retailer and restaurant destination.

“Number three because they’re not just thinking about emissions that come from the landfill. They’re thinking much more holistically. What about all the land and the emissions that were created for growing that food that was then wasted in our buildings, in our businesses, or on the farm? What about those emissions? I don’t think they even go into, what about if the 40% … Forty percent of food is wasted in the U.S.? Think of 40% of the agricultural land we have. If that was then restored to native ecosystem, think of all the carbon that could be sequestered there. That’s not even accounted into this number three. 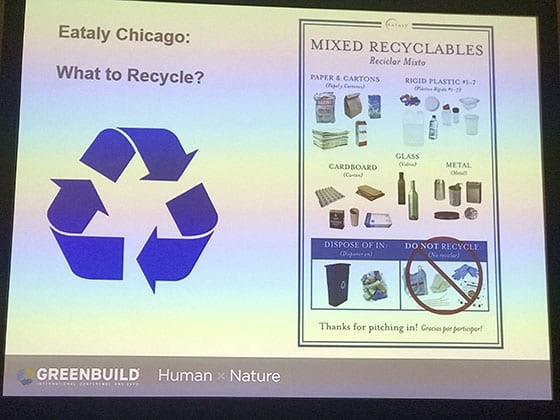 Then, if you look at the latest report from the UN, if cities like New York City took the consumption based emissions into account, the greenhouse gas emissions will be 60% higher, so waste is a much bigger problem that many of us think. I can see so many people coming to this section because I think people are beginning to realize just why, what big deal waste is, and the fact that we as architects can, or engineers and facility managers can do things in the way we design our buildings to reduce the amount of waste we produce. Yeah, you see food waste is number three. 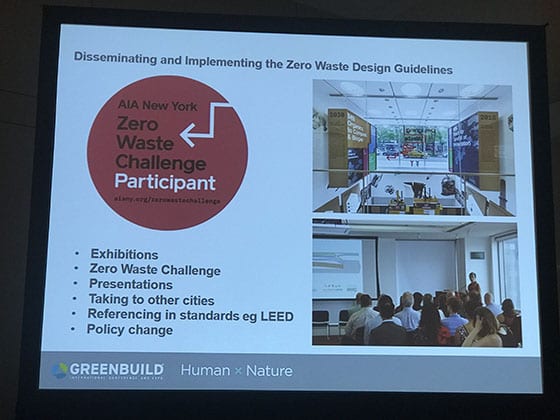 Composting is number 60. Anaerobic digestion, methane digestion is another thing that come up in the guidelines that you can use organic waste for. Recycling’s in there, all these different waste related strategies are part of drawdown. If anybody doesn’t know drawdown, I would say take a look at it because it’s a real comprehensive look at things we can actually do and things people are already doing to bring down carbon. These zero waste design guidelines came out of that AIA New York. We got funding from the Rockefeller Foundation really to ask the question, what can architects do to help York City get to a zero waste goal? 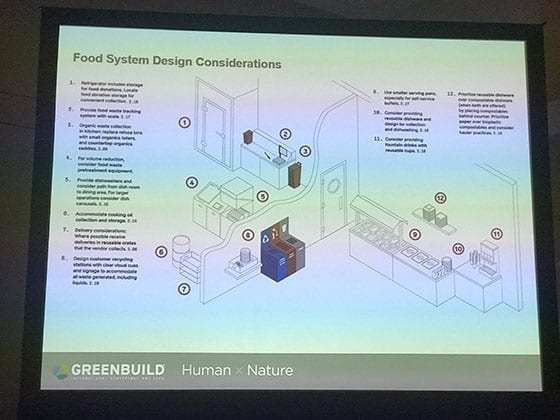 First, we started by looking at the waste stream. This Sankey diagram shows New York City’s waste stream. The thickness of each stream here relates to how much waste there is. It’s directly proportional. From the 12 and a half thousand tons that Department of Sanitation in New York picks up every single day, there’s about another 12 and a half thousand picked up from the commercial side with commercial haulers, from that twelve and a half thousand tons, all that portion is pretty much recyclable, but only this 20% actually gets diverted. The amount of that that actually gets recycled and reused is much smaller. That’s just what makes it to the MRF.

If we look at organics, New York City has one of the biggest organics collections in the country but only a tiny fraction of it is actually getting diverted. Most of it is going to landfills or some to waste-to-energy incineration, but it’s trucked as far as South Carolina or Kentucky. I mean, it just makes no sense to think of this much organic waste being produced and then having it transported to many hundred miles away where it then decomposes anaerobically, giving off methane on the greenhouse gas in the landfill. Just seeing the scale of the issue and the opportunity that we have especially in this organics portion to make … We don’t have to export this and have it taken to China to be recycled to come back and they have to deal with the problems of that. We can divert this locally. You can even divert organics within your complex with the anaerobic digestion connected, combining power that could be powering your buildings right there, or it can go up the Hudson Valley and can be used to grow more food to come back down to the city.”

One of our clients is Eataly. We started with Eataly in New York, so very relevant and they participated in the design guidelines process with us for a case study. Eataly is a chain of large Italian marketplaces. They’re a global company, started in Italy. They launched in New York in 2010 with their Flat Iron store, which is their flagship. They now have seven … Well, six, and almost seven stores in North America. They’re opening in Toronto soon, but they have one right here in Chicago, if anyone wants to check them out while you’re here.

They are a complicated client, I will tell you that. And, here let me go back here, so you can just ogle the beautiful food hanging from the ceiling. But so, Eataly. A typical site has over 500 employees, their sites are between 50,000 and 100,000 square feet. They have food processing, lots of it. They have multiple fine dining restaurants in a single location, and massive retail. So, there is food everywhere, there is packaging everywhere, they have very large containers being shipped in, of materials to process food, and then they have lots of single use disposable items, because people are taking things out. So, if you want to be a tiny company and pilot your service with the most complicated client you’ll ever have, do what we did and start with Eataly. Because now, what … We have complicated hotels calling us, we’re like oh, we got this. This is nothing. We figure this out. 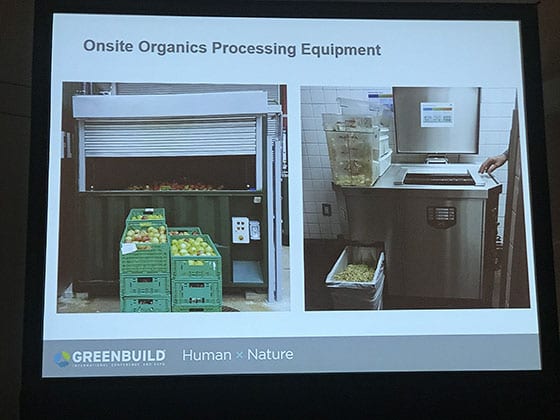 As I mentioned, there is food production everywhere, there is waste being generate throughout these stores, so we have to spend a lot of time with them. The problems we wanted to solve for Eataly were we wanted to get a really meaty composting program in place, because as you can see … This is an average, from audits that we’ve done over the last six plus years of what we see when we actually separate all the materials coming into a food business, and I’m going to shout out to Stephanie, here, because when we start talking to companies about zero-waste, you see people start to sweat and panic. Because, often at least 60 or more percent of what they’re producing is going in the trash.”

We’re volunteering to help Cincinnati’s Contemporary Arts Center apply the USGBC ARC Program. It will include measuring and reducing food waste. Get in touch if you would like to help; Chuck Lohre, [email protected], 513-260-9025.