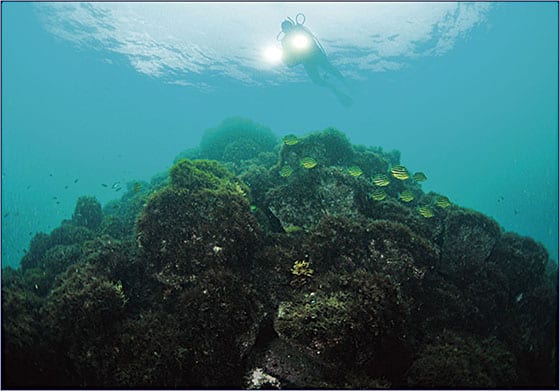 By Masumi Suga
November 29, 2018
Nippon Steel says leftover slag can be used as sea fertilizer
May sound like dumping, but scientists and fishermen agree

Deforestation is a bigger cause of climate change than all the world’s cars and trucks combined. Some of the damage is done underwater, where entire forests of kelp and seaweed are vanishing.

One fix may come from a Japanese company in an industry better known for its carbon-dioxide emissions than for environmentalism. Nippon Steel & Sumitomo Metal Corp. says it’s found a way to use some of its waste to stop underwater erosion and as a fertilizer that rejuvenates dying seaweed.

Skeptics might be tempted to dismiss this as slick PR or as a cover-story for dumping. But fishermen say the technology has helped restore fish populations off Hokkaido. And Shinji Sato, a coastal engineering expert at the University of Tokyo, says it could help absorb greenhouse gases. “This is definitely a worthwhile effort,” he says. 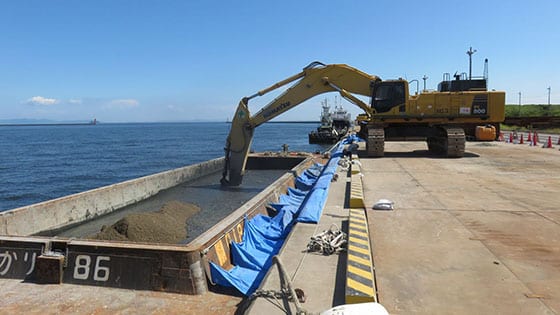 The idea that waste can be put to productive work goes back at least as far as the Kalundborg industrial park in Denmark, where since the 1970s dozens of factories have been saving money by trading byproducts. A residue collected by one plant’s smoke-stack scrubbers, for example, becomes an ingredient for construction materials made by another; surplus heat goes to warm local homes.

“If it’s radioactive, then yeah, that’s called dumping,” says Deishin Lee, a professor of operations management and sustainability at Ivey Business School near Toronto. “But if it’s a wasted resource, then let’s see if we can find a place for it to be used productively.” 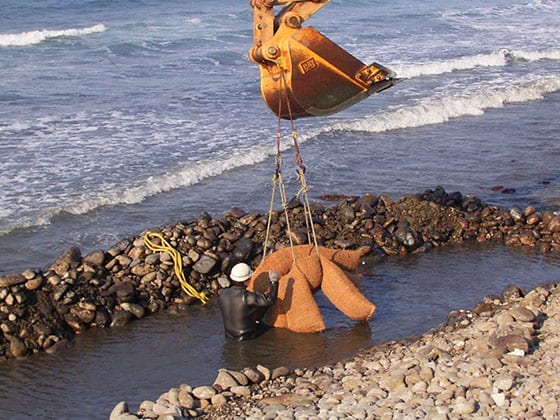 Mixing steel slag and dredged soil on the coast of Himeji city in western Japan.Source: Nippon Steel & Sumitomo Metal Corp.
Nippon Steel’s furnaces generate 17 million tons of molten slag each year. Most of it is technically not waste because it’s turned into sealant for road asphalt or used as a cement additive. But there is still a large remainder, which is only good for making things like gravel — not a money maker.

Finding a better use for that material is why company engineers around 2000 came up with the idea of using the iron-rich residue as an underwater fertilizer. Japan has lost kelp and eelgrass along long stretches of its coastline, partly because river dams have starved coastal plants of nutrients that would otherwise have run off into the sea, according to Sato, the University of Tokyo professor. 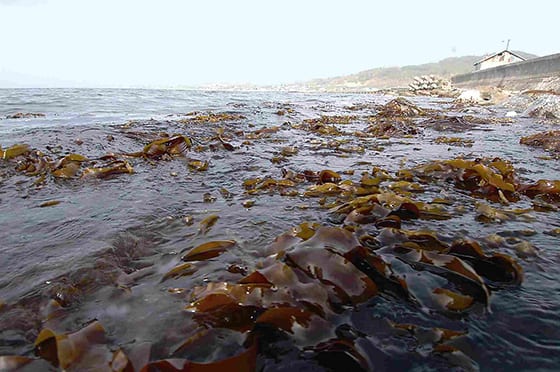 Installing Nippon Steel’s iron supply units.Source: Nippon Steel & Sumitomo Metal Corp.
So, with the permission of local fisherman, Nippon Steel in 2004 launched a small test off the coast of Hokkaido, seeding the seabed with bails of slag and fermented wood pulp.

Within a year, kelp staged a spectacular recovery, growing 220 times more than in a nearby, untreated area. A larger study started in 2014 is also showing results, though somewhat less dramatic, according to Hiroyuki Aiuchi, who represents a fishing cooperative in the nearby town of Mashike. He says catches of abalone and sea urchins, delicacies coveted by sushi chefs, have improved.

“It seems to be working,”he said by phone.

Eiji Kiso, the Nippon Steel staffer who oversees marketing for the project, says the company hopes eventually to sell one million tons of slag each year to fisheries and local governments.

He says steel slag can also be used as a kind of glue to stop erosion around places like ports, where dredging has turned the seabed into fallow sand. Under a swath of sea the size of 20 football fields, near one of its iron mills on the edge of Tokyo bay, Nippon Steel has used some of the material to build a sort of underwater planter’s bed. Seaweed growth has taken off, attracting fish and drawing scores of sports fishermen on weekends, Kiso says.

Ecologist Tomohiro Kuwae is a fan of these experiments. A scientist at the Port and Airport Research Institute, a government-funded think tank near Tokyo, he says as much of 20 percent of the slag generated by Japanese metal producers could be used to restore ocean ecosystems.

Revival of kelp forests after placement of iron supply units at Mashike town.Source: Nippon Steel & Sumitomo Metal Corp.
The big payoff, he says, has less to do with sushi than climate change. Healthier plant life along Japan’s coastline could help absorb an extra nine million tons of carbon-dioxide annually over the next decade or so, according to calculations by him and other scientists. Kuwae belongs to a group of researchers pushing to have seaweed counted as a carbon sink in international agreements.

If that happens, Nippon Steel’s inventions could help Japan meet its goals for cutting greenhouse emissions by a quarter by 2030.

First, though, the company will have to win over more fishermen.

“We support the project,” said Aiuchi from the Mashike cooperative. “But others are bound to be skeptical.”

— With assistance by Jason Clenfield