2016 was the second celebration of the Awakening, the communication with the Elements and Universe allowed by Fungi. The first one for me in 2010 was not as successful as in 2016 because the communication conduits were harder to amass the required connections. This year I achieved all my goals. Next, I’ll teach others.

The first life on Earth was Fungi, which ruled for over two billion years. The second life form was based on photosynthesis; they worked with the fungi to colonize the planet. The Elements and the interaction of their ions, electrons, and nuclei are what life is. Fungi, plants, and insects have a deep level of communication and are in harmony with the Earth. The Age of Communication, which is celebrated by the Awakening, started in 2004 when Iona became one with the Mycelium and tapped into the Knowledge of the Universe. She explored and taught others how to teleport through the network. In 2010 there was the first gathering of those that had learned her techniques. I’m just getting back from my second in 2016. I learned of Iona in 2010.

The Age of Communication marks the end of the Anthropocene, Man Centered. It was the successor to the end of the age of fishes, reptiles, dinosaurs, and pterosaurs. All who lived on the Earth in harmony because they weren’t selfish. Only when Homo Sapiens evolved did the resources of the Earth get destroyed along with 50% of all other species. The Earth became a hot, dry world prone to storms and extremes. Equally as sad were the zombie plants unleashed by man, plants with genetically modified DNA that cuts any bond to fungi and insects. So sad these beings have to wander the planet searching for their soul.

Woda is my name. I’m glad to live in the world today and experience the new connections humans have made with the Universe. Our ability now to learn from the Elements through the Mycelium is wonderful. To attend the Awakening celebration, you use the fungi capability to magnify and multiply the number of connections to connect yourself to the global Mycelium. It’s sort of like a floatation bath, but the bath is a mass of mycelium that connects you to the Universe through your skin. All the attendants do it and project themselves to a location where their presence will have the most negligible impact on Earth’s life. There, we can perform, dance, love, teach, and share our experiences with others. At last human organisms have become a positive force in the universe and we have found others out there. 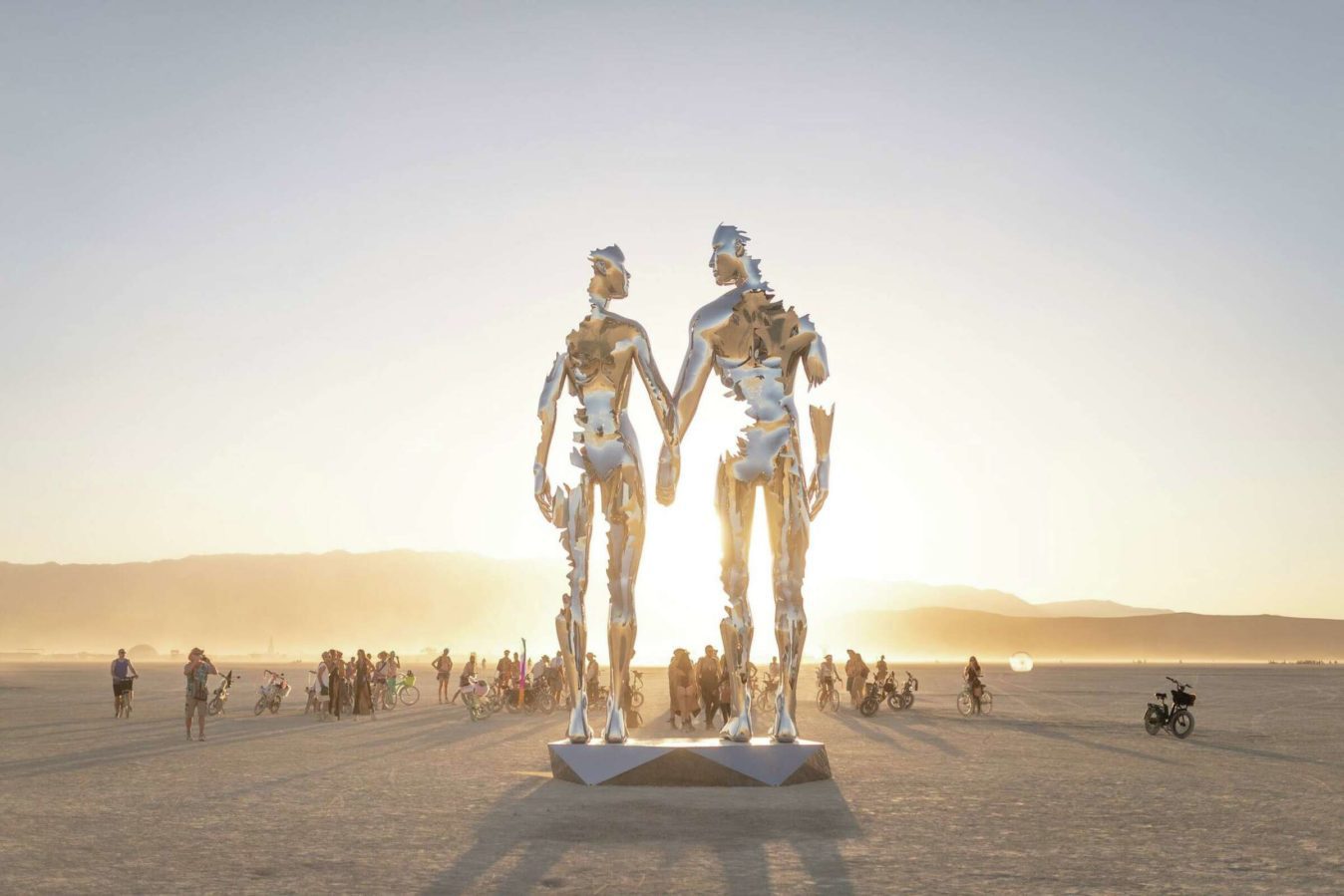 One of the most enjoyable times at the Awakening was the final dance party the morning after the Narwal burn. After waking up, I heard the sounds and headed out into the jama. There I saw many of the leaders of the Communication Movement. Jared, who defined the connection quantity to create consciousness. Mara, who deciphered first Hydrogen’s knowledge, then Helium, and so on. Crystal was there; in all her glory, she was the first to understand the message of the stars. As stars form and begin to create new elements, they also share knowledge in one direction, like listening to music; it tells the story of the Universe if you know how to listen. We were dancing around a beautiful piece of artwork illustrating a woman and a man holding hands at the moment they are being transported through the Mycelium. I was standing in the early morning shade of the statue. Others noticed my dress as a teacher and thanked me for my service. The mobile sound stage was “Gaxa” a deer.

On my first Awakening, I learned how hard it was to learn how to communicate by teleporting. I was there but didn’t know the who, what, when, or where. This time I followed Iona and remembered her presence locations. I got mixed up with false information from a mycelium librarian and found myself in another location. There I met Ed May and his friend. They were looking for Iona as well. I checked my earlier notes and decided that was where we needed to be, at Alpha Can Camp. We both found our way there and enjoyed Iona’s music for time travel. Ed shared some transportation secrets with me. We’re both such Iona fans; we both like everything she has done.

Homo Sapiens selfishly used up many of the world’s obvious resources and destroyed their world. No matter that some realized it was wrong. The evil ones created an imaginary world where it’s legal for them to destroy nature. It was a sad time. Once the population had shrunk to around 500 million, the Earth started to recover. The Awakening finally showed us our place in the Universe. The Elements are our teachers; the Fungi were the first to live from the Elements. Photosynthesis and chemical synthesis were the next lifeforms to live in harmony. As the top multi-celled life form, we were able to build on the knowledge of our ancestors at a magnitude equal to the speed of light. Evolution at the speed of light versus walking. Other planets, moons, and asteroids that created self centered beings also nearly destroyed their habitat before achieving Awareness. We are now Guardians of the Cosmos. It’s our job to help others on this journey of leaving no trace, giving without expectation of reward, loving all life, and teaching others. That’s my unique role. I’m training to be a teacher of the new way.

When humanity raped the planet, it destroyed the global mycelium network. It took tens of thousands of years after our fall to regenerate and make the Awakening possible. The Earth lost consciousness during that period. Gaia is the ability of the global Mycelium to redistribute the Earth’s resources to encourage life. It’s how the Universe became conscious. Ten billion years ago, the Universe became conscious. As stars died and exploded, they spread fungi to other galaxies. Dark matter slowly decays and creates Hydrogen, releasing the energy to expand the universe. The expanding universe creates gravity. It’s an equal and opposite force.

At the Awakening celebration there are many challenges to being present. You have to conserve, super insulate and be energy efficient; in that order. Don’t assume more space than you need. Super insulation and reflective exteriors provide shade and prevent temperature extremes. Solar ovens and light emitting diodes provide very efficient cooking and lighting. Air sealing is also important with air filters and energy-efficient ventilation. In the dry atmosphere of the desert, swamp coolers along with an ice bed can reduce the temperature by 30 degrees. Long, lightweight hooded robes are good during the day. Evaporative cooling fans are excellent. A good citizen would be carbon negative. That is the meaning of life in the Universe, take nothing and create something to give to others in need.

What made my Awakening was a sunrise set by Iona at Giki Vier camp. Her husband also played there, and it was magical. A dream come true for me. Iona is my Priestess, and I’m happy to follow her teachings. I came away from the journey knowing a lot more about Iona; personally, I found her to be a very joyful and happy person. Quick to share a hug and laugh. I met her husband, Alpha, and their PDAs were touching. Lots of chatting and hamming it up with her friends. Life must be a challenge for Iona and Alpha. They constantly travel and perform. She’s a “One gal band,” she said, managing her social media and their new daughter U Zora, about a year and a half old. For someone so knowledgeable and one of the founders of the Awakening, like the Dali Lama, funny and approachable. Her smile and bright eyes bring joy to the world.

At first, there was only Possibility. It wanted to be conscience so it created Hydrogen and released a tremendous amount of energy that caused the expansion of the universe. In creating Hydrogen, the positive nucleus, which is matter controlled by the speed of light, gravity and other fundamental forces. The negative electron is not real half the time. It doesn’t exist in one dimension. It is everywhere all at once half the time. That’s why there is spooky action at a distance. The first organism to be conscience was Fungi. Consciousness is caused by a tremendous amount of communication through connections like neurons. Second were bacteria, plants, and insects that became conscience. Finally, there were other life forms but they didn’t become conscience to the Universe: flatworms, fish, crustaceans, etc. Eventually, when the human brain created the necessary number of connections, it became conscious only to itself and not the Universe. Taking fungi, the human brain creates several magnitudes more connections and becomes universally conscious. It doesn’t last long, and we are still trying to understand what it means.

I’m working on an art piece for the next time, a sundial with wind whistles that tells the story of life. Lenses take starlight and moonlight and concentrates it to light the art at night. Solar power raises water to store energy for the night lighting. phosphorescent life brings light after motion.

Not sure if I’ll make it back to the Awakening in 2022 but I probably will. The good times far outweigh the hardships. Hopefully, Iona’s sister Uki will be able to make it. I like telling people I love them.